Kazungula Bridge To Link, Open Up Markets In African 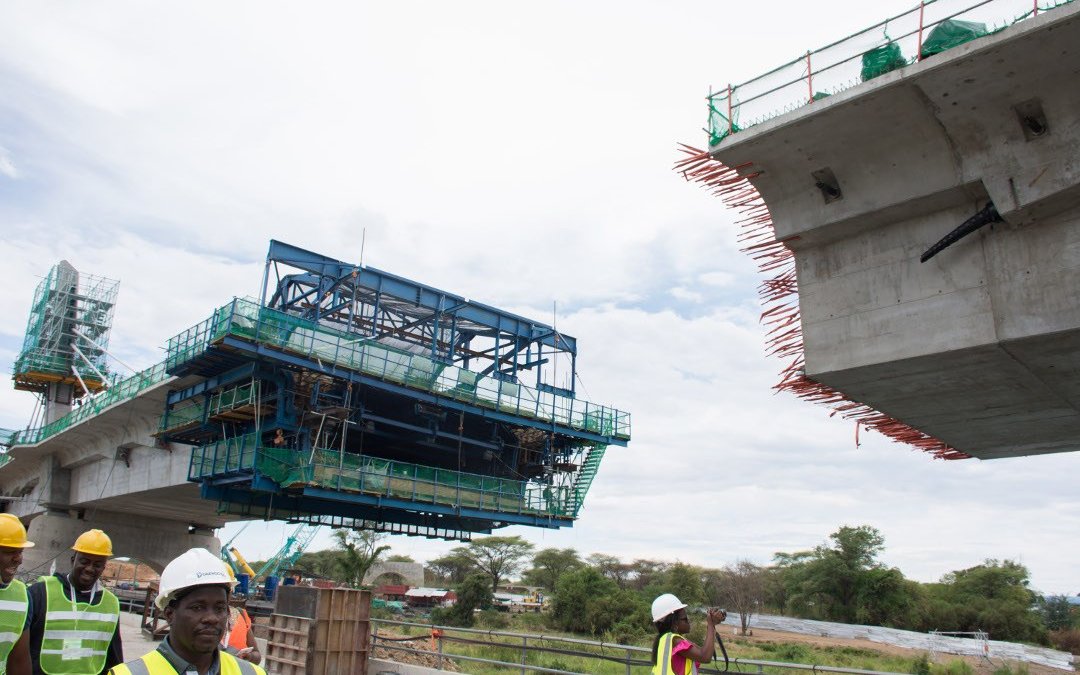 Scenes of traders, travellers, fishermen and women crossing the Zambezi river on floating planks, ferries, rickshaw boats, and canoes will soon come to an end. In just 24 months, travelling between the water-rich but land-locked Zambia and Botswana will get easier, smoother and faster, when the new road and rail bridge, currently under construction across the waters of the Zambezi, is commissioned for public use.

The 923-metre-long by 18.5-metre-wide masterpiece will link the town of Kazungula in Zambia with Botswana. Its location traverses the intersection of the Zambezi and Chobe rivers. At this point, four countries – Botswana, Namibia, Zambia and Zimbabwe – meet.

The Kazungula Bridge Project will have a single-line railway track, pavement for pedestrians and international border facilities: two One-Stop Border Posts, located on Botswanan and Zambian territory. When completed, the bridge will be connected to the Mosetse-Kazungula Railway.

The project was one of several projects showcased by officials of the Kazungula Bridge Project Office during the 2018 Programme for Infrastructure Development in Africa (PIDA) Week.

Seeing is believing. Consequently, the conveners of the annual infrastructure summit, the African Union Commission, NEPAD and the African Development Bank, scheduled a trip to the site of the project as part of the week-long PIDA Week, held from 26-29 November 2018.

“It is obvious that once completed, the Kazungula Bridge Project will actually bridge the regional divide,” Mamady Souare, Manager for Regional Integration Operations at the Bank told the 110 participants and reporters who made the trip from Victoria Falls to Kazungula.

“The project will transform the dynamics of transportation in surrounding communities, counties and cities, boosting road travel and the ease of doing business within the Southern African Development Community, the East African Community and the Common Market for Eastern and Southern Africa,” Souare further remarked.

The development has been facilitated by a tripartite arrangement between Botswana, Zambia and Zimbabwe on the North-South Corridor within the Southern Africa Development Community (SADC) region and is part of a corridor-long infrastructure improvement programme, to enhance regional trade and integration.

Following feasibility studies and funding approval for the nearly $260 million project by the board of the African Development Bank in 2011, construction began in 2014, after the governments of Zambia and Botswana announced a deal to build a bridge, replacing the existing Kazungula ferry service. The principal financiers of the project include the governments of Zambia and Botswana, the African Development Bank, the EU-Africa Infrastructure Trust Fund grant and the Japan International Cooperation Agency.

Zimbabwe was brought on board the project as a stakeholder in March 2018, after Presidents Emmerson Mnangagwa of Zimbabwe, Ian Khama of Botswana and Edgar Lungu of Zambia jointly inspected the progress of the multi-million-dollar project.

Also addressing media in Kazungula, Ibrahim Mayaki, Chief Executive Officer, NEPAD Agency said: “Progress is not only visible on the Kazungula Bridge Project, but this project is proof of the consensus and focus on infrastructure development amongst regional and continental stakeholders and credit must be given to PIDA for this…”

As of October 2018, the project had created about 1,485 new jobs including employment for 118 women.

From a policy perspective, the Kazungula Bridge Project leverages the African Development Bank’s Industrialization Strategy for Africa (2016 – 2025). It also aligns with several programs and strategies put in place by regional and continental bodies to improve infrastructure as an anchor for sustainable transformation. These include: the SADC Regional Infrastructure Development Master Plan; the Revised SADC Regional Indicative Strategic Development Plan 2015 – 2020; the Tripartite Trade and Transport Facilitation Programme; the New Partnership for Africa’s Development (NEPAD) Short-Term Action Plan, and PIDA.

As the first wave of vehicles and pedestrians begin to use the new bridge, the regional economy will receive a much-needed boost through increased traffic throughout the North-South Corridor, a key trade route linking the port of Durban in South Africa to Botswana, Zambia, Zimbabwe, Malawi, Mozambique, DR Congo, and up to Dar-es-Salaam in Tanzania.

The facility will effectively serve as a gateway for goods from landlocked Zambia and Botswana to the afore listed countries straddling the North-South Corridor, a geographical zone of about 279 million people, larger than the populations of France, Germany, the United Kingdom and Spain combined.

When completed, the bridge and one-stop-border-posts facilities will enhance regional trade, spur increased global competitiveness due to reduced time-based trade and transport costs, and reduction of transit time for freight and passengers from between three to eight days to less than half a day.